How Drones Are Being Used During COVID-19 *Please note: This article was originally published 5 March 2020 and has had limited updates since this time.

We talk about drones being used as a force for good a lot. But often we discuss a singular usage. Something like using drones to map the amount of refuse in coastal areas.

What we’re starting to see now is a multi-faceted approach to using drones. This is beginning to look like it could be particularly effective in crisis situations. In our article, 19 Reasons Kids Should Learn to Fly Drones, we identified reasons such as the ability to report and communicate the reality of a situation for better journalism and decision-making, as well as developing a greater understanding of a complex situation.

The global response to the outbreak of COVID-19, commonly known as coronavirus, is a real-life example of how an integrated and complex approach to preventing a potential pandemic can be greatly assisted by drones in the future.

Below, we discuss the role drones play in a pandemic – in distribution, journalism, detection and prevention. This crisis has forced a huge technological response. We need to be careful not to assume that this technology works perfectly and is the best solution — it’s more about the potential it holds for proven solutions.

In a way, it feels like we are getting a sneak peek into the many different hats that drones will wear in the future.

A short step back in time

In 1918, a deadly influenza pandemic, commonly known as the Spanish flu, spread to almost every part of the planet and killed at least 50 million people.

The Spanish nickname given to the flu was part of a concerted effort on behalf of nations involved in World War I to hide the grave extent of the influenza virus in their own countries and keep wartime morale high. Spain was neutral at the time so publications in the likes of Germany and the United Kingdom were allowed to report on the virus there — and so the name the ‘Spanish flu’ was born.

Early 20th Century popular culture saw the virus take many incorrect shapes – that of an insect, a devil and diseases such as cholera. Opportunists used the virus to point the finger.

Artist, Jordan Baseman was commissioned in 2018 to create a digital piece commemorating the centenary. Using the British Newspaper Archive, he created Radio Influenza, a 365-day look at the stories surrounding the virus.

What he found in his research was the staggering number of differing ideas. “The flu was blamed on foreigners (anywhere in the world, not just the UK), on Jewish people, on dancing, on jazz music, on the bombing of the soil as a result of the war, and on pretty much anything else you could think of.”

Medical and educational advances mean that news stating that the coronavirus is the devil is unlikely to gain traction. However, for all of our advances, misinformation and fake news are rife in today’s society. A concept known as ‘viral misinformation’ or ‘emotional contagion’ is regarded as being a huge threat to global public health.

As a very basic start, citizens need to know:

What and how this information has been delivered during the coronavirus pandemic has differed greatly from country to country, but one thing is certain — it needs drastic improvement.

Internet Trust and Monitoring tool, NewsGuard had this to say:

“So far, our Coronavirus Misinformation Tracking Center has identified 93 sites publishing false and potentially harmful information about the outbreak across the U.S., United Kingdom, Italy, Germany, and France. Many of their posts are being exponentially more widely shared than those from the health authorities trying to deliver real and reliable information.”

Source: The coronavirus ‘infodemic’ is real. We rated the websites responsible for it

Sources: We won’t link to these sources to prevent unnecessary clickthroughs as these theories have been debunked, but you can find the original websites in the link above.

The role of drones

You might be wondering what reporting on coronavirus has to do with drones. A lot, actually. The correct sharing of information is an essential part of the STEM process. Health authorities deliver information from experts and advisors, many of who are in the STEM industry with a pandemic like this. How and what they deliver can depend on the government’s agenda at the time, just like in the Spanish flu.

Pence Will Control All Coronavirus Messaging From Health Officials

A more accurate way of reporting a situation

Drone footage, through both official and ‘citizen’ journalism, has the ability to cut through politically-managed rhetoric and visually show the reality of the situation. Below, is a selection of drone footage from various sources:

The epicentre of the virus, China, also happens to be the country with the biggest technology spend. Because of this, we’re seeing a lot of technology being deployed to help prevent further contamination. While technology isn’t seen as the driving force behind stopping the outbreak, China has been experimenting heavily with using drones and robotics in the following ways:

Many different types of clips, such as the one below, are going viral on the internet. These show drones being used to communicate with citizens, telling them to go back inside, wear their face mask, and other necessary information.

The example below has allegedly been released by state media in China. Unfortunately, we couldn’t find examples where people’s identities had been hidden.

…of goods and services

It is reported that there are 780 million people living with travel restrictions in China. Let that settle in.

Here’s another way of looking at through world population data:

Reportedly the number of people in China who are under some sort of travel restriction, mandatory quarantine, self-quarantine or unable to travel to different neighbourhoods is the same as the population of all of these countries.

While delivery drones are not yet the norm globally, Chinese e-commerce giant, JD.com has been delivering packages containing snacks, electronics and other necessities to badly affected areas of China.

This is to prevent human-to-human contact and keep supply chains open that have been disrupted by the lack of land transportation.

Flying patient samples and medicine by drone reduces travel time (some studies have suggested by up to 50% in heavily congested areas) and frees up ground transportation for medical emergencies where a patient has to be transported. It also reduces that human-to-human contact and the ‘secondary pollution’ to any samples.

Thermal cameras are being used to try and detect people with high temperatures, a symptom that the individual may have contracted the virus.

The problem with using drones with thermal cameras for disease control is that the drones were intended for industrial use, not for measuring human body temperature. The readings could be out by 4 or 5 degrees Celsius because of this. The world’s leading drone retail company, DJI, is based in China. Their experts spent 3 days coming up with a solution for this.

The answer? A cotton swab.

Attaching a cotton swab to a Mavic 2 Enterprise drone’s thermal camera allows the drone to recalibrate its thermal mapping to within a 0.5-degree Celsius margin of error (a significant fever is when the body shifts from a normal temperature of 37 degrees Celsius to 38 degrees Celsius and above.)

As amusing as it is to see household ingenuity used by a tech giant, this setup is simply an emergency response to supplement the highly overstretched medical care in China. It does give us a peek into how drones and robotics can start to be used in the healthcare industry.

The ethics of it all

Of course, it’s not possible to discuss detection without considering the ethics behind it. Particularly in nations that have high levels of surveillance and low levels of transparency and accountability about the tracking of individuals.

For a lot of people, this will feel like the beginning of a dystopian nightmare. And a good dose of scepticism towards drones used for surveillance and medical care is a healthy thing.

Lowering technical bottlenecks, like the recording time of a temperature, can reduce intrusiveness, while ensuring that AI algorithms are programmed by a diverse group of people reduces the amount of bias. However, there’s more conversation to be had at a political level; and greater transparency required about the tracking, storage and distribution of such data. 2 EduDrone Takeaways to Include in Your Mapping Curriculum 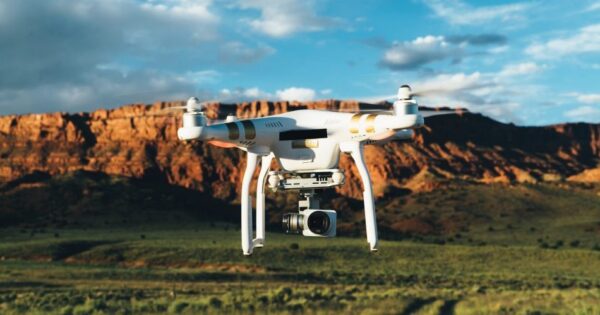