Can I fly my drone indoors at school? Can I Fly My Drone Indoors at School?

There is much confusion around at the moment with using drones in schools. Particularly around using microdrones such as the DJI Tello indoors.

Can I fly my microdrone indoors at school?

The short answer is yes, if you are are an education institution (school, university etc), and not flying in a hazardous manner. If you are an external provider running an incursion in a school (like us), then you need an approval from CASA.

To read the details around the law on this see below!

We have done the hours of reading of the regulations, and have been working with CASA over the last two years to understand the complexities of this.

When you are flying drones (indoors or outdoors), CASA puts you into one of two categories.

– ‘Sport and recreation’ if you are doing it for fun, a hobby, or are in education (see the legal definition below). This is the category that teachers fall into when teaching their students, or running PD for other teachers; or

– ‘Hire or reward’ if you are paid or have some other reward, like a promotional benefit, if you are a third party provider operating in schools or community organisations. This is the category we fall into at She Maps.

The Legal Definition of Educators

Educators are specifically called out in the most recent amendments to the Legislation (see the relevant paragraph below), where they are termed to be flying ‘model aircraft’ when flying drones up to 7kg. 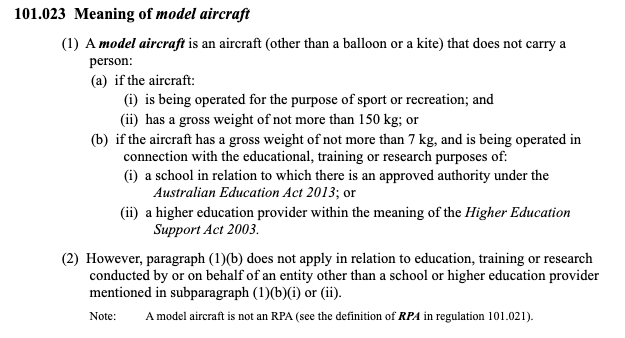 If you are looking for some more user friendly language from CASA about drones in schools, then you can read more on this page on their website.

The above paragraph (101.023) does not cover external providers to conduct microdrone programs indoors in a school (see sub para 2), unless they have an approval to operate microdrones indoors closer than 30m to people, like we do (read on).

So first off, let’s confirm some definitions.

We all know what a drone is, but in CASA’s eyes, a drone is classified in two different ways. It is either a model aircraft or a remotely piloted aircraft (RPA).

Model Aircraft – An aircraft that is used for sport and recreation and cannot carry a passenger.

Sport and Recreation – In relation to the flight of an unmanned aircraft, a flight activity only for the pleasure, leisure or enjoyment of the remote pilot.

RPA – A remotely piloted aircraft, other than a balloon or kite. There are also different types of RPA categories, by weight.

So, when we are discussing the use of drones in schools, as CASA has determined that schools are flying under sport and recreation, then we will call drones, model aircraft. This is important to understand as it affects which parts of the regulation we need to look at.

If you fly drones for hire or reward (third party provider), then you are flying a RPA and a different part of the regulation defines your operation.

This is the CASA Regulations (the law) that applies to all aircraft use, and Part 101 is the area of the regulation that applies to model aircraft and RPA use in Australia. This latest compilation was registered on the 17th of March 2022.

We are going to look at the subparts that apply to both model aircraft and RPA, which are Subparts 101.A to 101.G.

Let’s look at the most important part of 101.A, in relation to flying model aircraft indoors.

If you are flying a model aircraft indoors, then subparts 101.C to 101.I do not apply. This is important because Subpart 101.F contains what is called the Standard Operating Conditions for RPA and Subpart 101.G contains the Standard Operating Conditions for model aircraft. These are all the important rules that CASA talks about to keep people safe when flying drones.

In both these subparts is where the 30m rule that many people are concerned with comes from. This rule states that you can’t fly a drone closer than 30m to someone who is not operating that drone (i.e. that one student flying the drone can be closer, but all the other students must be more than 30m away). This is near impossible to comply with in a classroom environment indoors!

BUT… As Subpart 101.G does NOT apply to model aircraft indoors, then these Standard Operating Conditions do not apply. So teachers, in a classroom, this does not apply to you.

For those of you keen eyed, you will see that this subpart applies to model aircraft weighing more than 250g… subplot coming up… CASA realised an error here and fixed this with what they call a Direction. They issued Direction 55/20 to ensure all model aircraft and RPA (regardless of weight) must be flown more than 30m from people, except those excluded under 101.005(c) – model aircraft indoors. OK, so educators are good to continue despite that sidetrack…

BUT… For third party providers, you are flying RPA, not model aircraft, and subpart 101.F applies to you, so you need an approval to conduct your activity with students, and have them fly closer than 30m to each other. Yes, yes, we know this is crazy, and so does CASA, but the legislation hasn’t caught up, and this is what we are currently left with – a bit of a regulatory hole! More on this part later.

Let’s stay with educators flying model aircraft indoors for the time being.

What about the other subparts that do apply for educators?

This subpart IS applicable to flying model aircraft indoors. So here is the important part…

This subpart still applies to model aircraft being flown indoors. So, we must ensure that we are not flying in a way that creates a hazard to another aircraft, another person, or property. But this is open to interpretation by the person in charge and appropriate risk mitigation factors need to be put in place.

For example, technically you could fly the Mavic Mini indoors, and closer that 30m to students, but that would be considered hazardous. This is why we stick with the Tellos indoors, less risk!

What are Subparts 101.C. D, E and F (even though they don’t apply to Model Aircraft flown indoors)

Subpart 101.C discusses things that you must consider if flying near prohibited or restricted areas, controlled airspace, aerodromes, visual line of sight, operating heights etc. But at the start of this subpart, it states that this subpart does not apply to those mentioned at 101.005(3), being model aircraft flown indoors.

Subparts 101.D and E refer to balloons and kites.

Subpart 101.F is related to RPA. RPA remember are by definition are when being used for hire or reward, i.e. commercial purposes, third party providers in schools. Yes, we will answer what third party providers need to do right at the bottom here. Also important for schools to consider if they are bringing a third party in to use microdrones in a student incursion, to run a drone competition etc.

So, break this down for me, Can I fly drones indoors at school as a teacher?

Are you a teacher wanting to use micro-drones (like the DJI Tello) indoors with your students and are flying with a ‘sport and recreation’ use as opposed to a ‘hire or reward use’?

What does this mean? We recommend clear flight lanes, safety areas to fly behind (like lines on the ground – doesn’t need to be drone cages), safety glasses and safety briefings at the start of the activity.

But what if we are within 5.5km of an airport or aerodrome?

Is there anything else?

Are you a teacher wanting to use drones outdoors?

I'm a Third Party Provider, What Applies to Me?

As a third party provider, providing a program into schools, using drones indoors, then you are considered to be flying under the ‘hire and reward’ ruleset for the Part 101.

This has significant implications, and yes, as crazy as it sounds, you are considered, in the eyes of the law, to be flying something different to teachers – an RPA.

Ultimately, this means that Subpart 101.F, which contains the 30m rule, and this is further enforced in Direction 55/20, you cannot legally run a microdrone program, indoors, anywhere, without keeping the drones further than 30m away from other students (unless… you have an approval from CASA).

For example, we usually run our programs in a large hall. Down one side we have the students all behind a line, and we have 10 groups, with 10 drones a couple of metres away. As soon as group 1 takes off their drone, then to be legal, that drone must be 30m away from groups 2-10. This is not feasible.

To fix this legislative issue, CASA bought in Direction 86/20 in December 2020, and then Direction 22/21, to allow third party providers, flying RPA under the ‘hire and reward’ ruleset, to apply to CASA for an approval to operate RPA closer than 30m, for micro RPA indoors.

If you are still with us, well done!!

This journey has been two years of working with CASA, and getting to the point where Direction 86/20 was issued, so we could then apply for an approval, and become legal again after the changes.

Here it is below. A simple letter that now allows us to do exactly the same flying with students, as teachers can do (without the need for this approval).

But, there is a 58 page Operations Manual behind this, full of risk assessments, Instructor training requirements, and compliance checks.

Make sure you ask any third party provider, where drones are going to be flown closer that 30m to students indoors, if they are approved by CASA (She Maps and our Education Partners operating under our Operations Manual are approved).

In the (highly unlikely) event of an accident with a student and a microdrone in a third party run activity, then you can be assured you as the organising teacher have mitigated this risk. Schools should always ensure that they are also complying with any Education Department requirements for the use of model aircraft in schools.

Please note that this information is correct as at 21 March 2022 and has been worked through with CASA. This is information based on our assessment and may not be applicable to your situation and does not constitute legal advice. Also, these rules and regulations will likely change as new Legislation and Instruments are issued. We recommend that you always ask questions if you are unsure.

Drones for classrooms: 3 types that teachers should consider